Stains-John Wayne Was A Nazi 7" 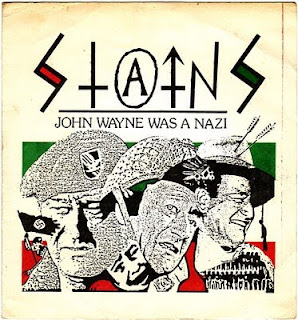 yes this is MDC. first called stains but changed their name to MDC because of LA's stains. well some great stuff here. actually, half of the records say MDC-stains on them and the others just say stains. their next two releases and comp tracks are pretty good too. these two songs appear on their LP as well but different versions. "john wayne was a nazi" is better on the LP and "born to die" is better on this 7". their still going today (big mistake).
1. john wayne was a nazi 3/5 (good song but better version on their LP.)
2. born to die 5/5 (great song, much better version than the one on their LP. the LP version is actually too FAST, you can't understand what he's saying, i didn't even know it was the same song.)
overall: 7/10 recommended (but good luck, their going for over $500.)
Posted by zach at 8:04 PM

Labels: album reviews, not that fast but great