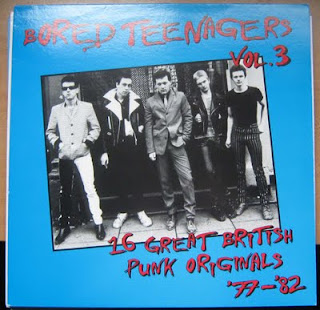 yes the long over due compilation post. well sorry it took me so long but i finally got this up for you luka. well, here it is now. the bored teenagers comps include only british punk from 77-82 and are the best comps i have ever heard in my life. almost all the tracks on every comp are great. all the comps were released by Bin Liner records and are still pumping them out as we speak. they are up to five now. all are out of print and limited to 500. well i think you can still get the newest one. head over to the Bored Teenagers site and you will get tons and tons of info on all the bands on these comps, including pictures. now listen to these fantastic tracks. most tracks are from demo tapes or 7"s. oh and all these comps include nice thick bootlegs too. greatly assembled with care.
1. the perfectors-YT502951D 5/5 (fantastic opener.)
2. the perfectors-mysterons 4/5 (nice slower track.)
3. the perfectors-new wave news 5/5 (great. so catchy.)
4. the injectors-frustration 2.5/5 (decent.)
5. the injectors-welcome to the club 3/5 (alright.)
6. xpress-all dressed up (no war to go) 5/5 (great driving stuff.)
7. xpress-what ever happened to fashion 5/5 (fucked up at the beginning where it skips a little bit, only re-up upon request.)
8. street people-personal values 5/5 (love this song.)
9. quality drivel-sale of the century 5/5 (my favourite band on this comp.)
10. quality drivel-subliminal cuts 5/5 (love the chorus.)
11. no way-crazy carol carter 2/5 (meh.)
12. no way-destiny 2/5 (kep.)
13. the mysterious footsteps-brain damage 5/5 (here we go.)
14. model mania-no pride slow suicide 5/5 (fantastic.)
15. the most-carefree 3.5/5 (nice.)
16. clay fav-air lakeland 5/5 (perfect ender, love the vocals.)
overall: 8/10 strongly recommended
some real smashers in here. not sure were to get this seeing that it's out of print. check out some shops, maybe they have some unsold copies. enjoy!
(((DOWNLOAD: MUSIC---SCANS)))
Posted by zach at 1:57 PM 3 comments:

well i'm sitting in the basement because it's hotter then hell upstairs. it's just a lazy dog-dangling afternoon so there is nothing else to do. so, time for some funk to give this blog a little life. this time it comes from the Blaxploitation film entitled Black Belt Jones from 1974. the intro to this movie is the greatest opening to any movie i have ever seen. this is mainly due to the incredibly funky track by Dennis Coffey. but the "great" fight scene adds to it as well. the Black Belt Jones soundtrack (mainly the 7") is noted as the holy grail of the blaxpolitation soundtracks, and i can see why. the main theme is one of my favourite tracks of all time. the rest of the film has some great tracks as well. the film was named 38 on the list of the documentary called The 50 Worst Movies Ever Made. i found that quite surprising. and then i looked into that documentary. well the documentary itself is a piece of trash. apparently the movies only go up until 1986 when the documentary was made well, well after that, in 2004. that documentary is terrible so don't fear. still, many don't like Black Belt Jones, but i do. the movie was officially released on VHS way back when but not on DVD. there is some Japanese bootleg though. a new dvd was released last year called Urban Action Collections which includes Black Belt Jones, Black Samson and two other movies, i still need to buy it. so i have included a great sounding rip of the main theme below. as well as the intro itself in video format. just enlarge the video to full-screen and change the quality to 480p for maximum funkyness.
Main Theme
Posted by zach at 6:26 PM 4 comments: 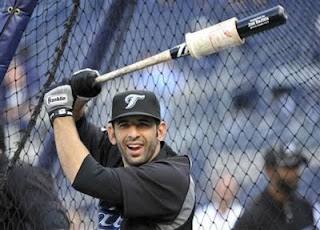 hey. well i want to start a new blog where i'm not just limited to Punk. it's gonna be about anything. i'll post a link later. so, there will be one more post here and then it's bye for good (although it must already seem that way).
Posted by zach at 8:15 PM 4 comments: