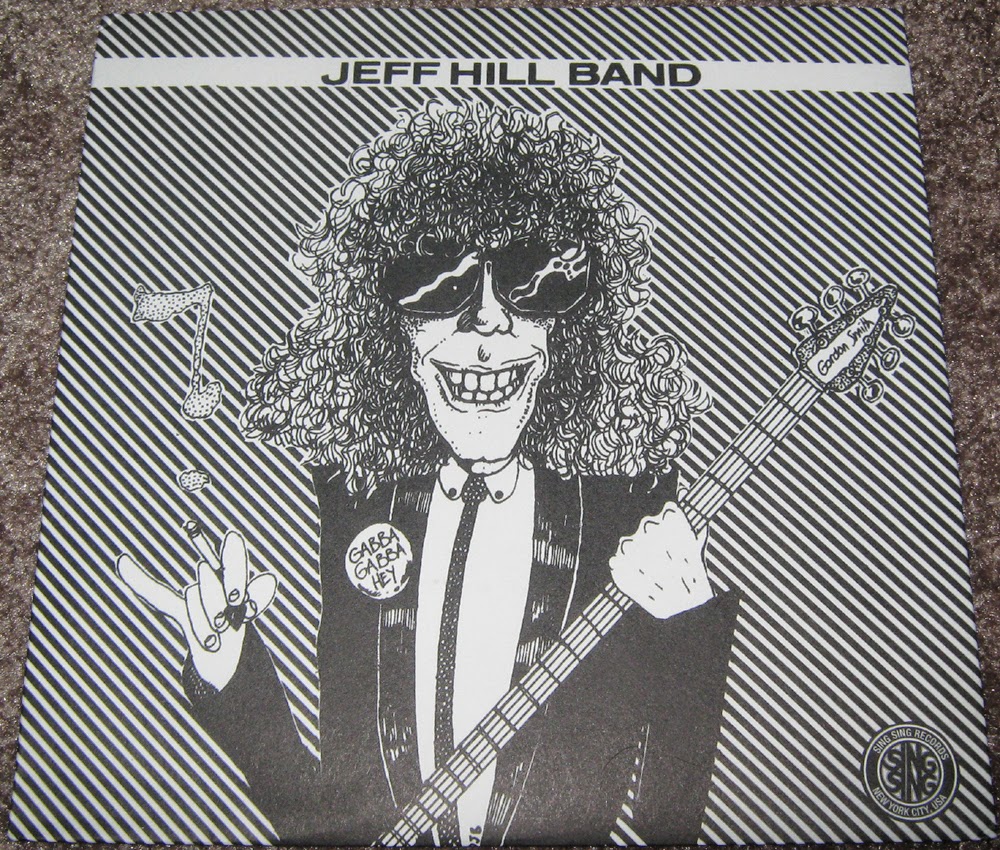 here's a fantastic powerpop record that was put out in 1979. after some a few aborted projects from various labels, the band decided to start their own label to put something out. too bad it's the only thing they put out before breaking up a year later. but i mean, that's the fate of so many great acts. the winner here is the extremely catchy a-side, super infectious. the flip is great too and worthy of an upload, but can't compare to the greatness of the first side. mandatory stuff right here.
01. something's wrong with my baby (just a classic.)
02. whatever she wanted (great too.)
the original is up there in price. luckily sing sing put out this much needed re-issue about five years ago, pick it up!
Posted by zach at 2:27 AM 7 comments:

grudge - when christine comes around 7" 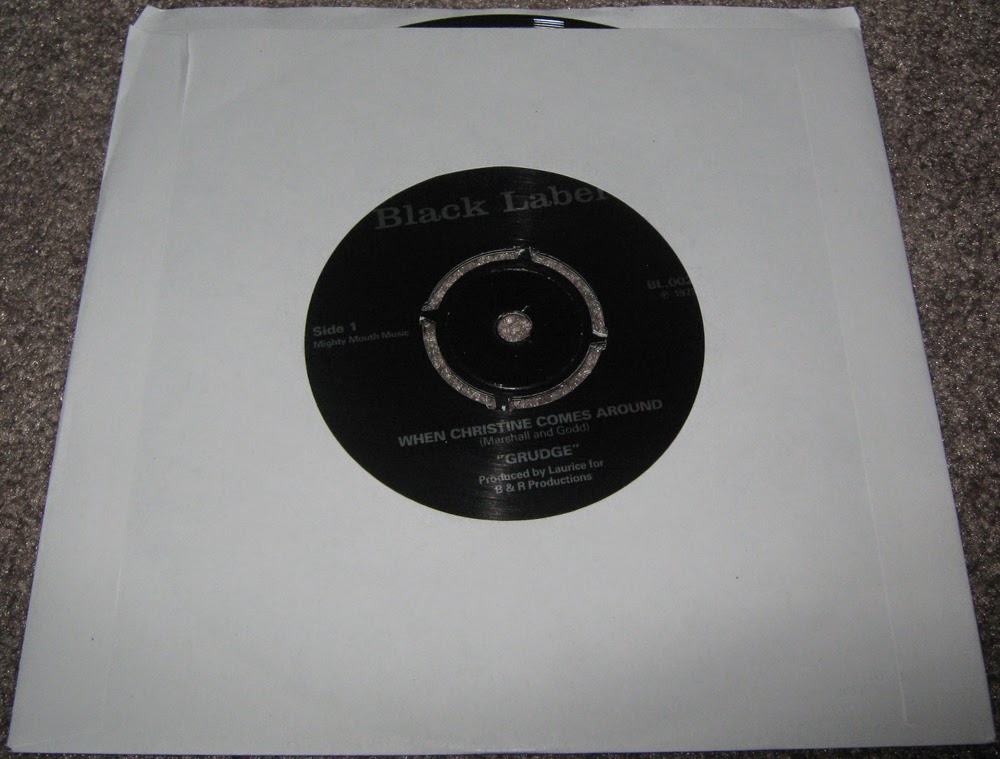 here we have one of the earliest, or even first examples of punk, that i know of. this was put out in 1973 and credited to a band called grudge. though the man behind it is a guy named laurice. he went on to claim small success once he started putting out disco music in the later half of the 70s. but this stuff was before all that. both sides are super catchy pop music with hideous lyrics. both songs sound similar, and have some of the same lyrics, but i've got to give it to the b-side here. it's the real standout.
01. when christine comes around (great song.)
02. i'm gonna smash your face in (so catchy.)
might mouse records put out a much needed re-issue of this, bringing this unknown gem back into circulation. they also put out an lp of the best of laurice. it's pretty good too, though the tracks lead mostly on the rock genre.
Posted by zach at 11:08 PM 4 comments: 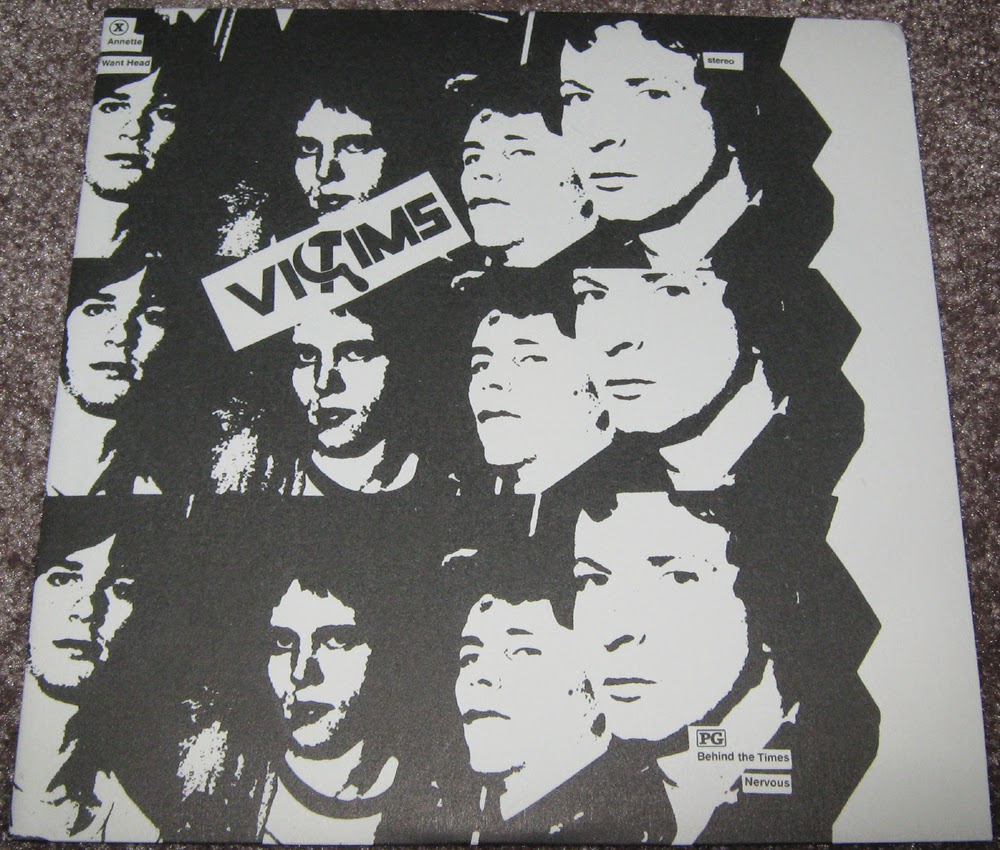 not my favourite band named victims, but these guys did put out some great tracks. released back in 1978 on plan 9, which is interesting since it's the only release on that label that isn't a misfits record. this is the second effort by them, and the record is split in two. the x-rated side and the pg-rated side. the x-rated side is indeed pretty crass, and it's not really that interesting musically. the pg side is the killer here. two really great driving tracks that get you going. the production sounds so raw, love it.
01. annette (actually catchy.)
02. i want head (awful and way too long.)
03. behind the times (easily my favourite.)
04. nervous (great too.)
the original release carries an extremely high price tag. 1977 records put out a great re-issue recently, grab it while you can (only 300).
Posted by zach at 2:24 AM No comments: 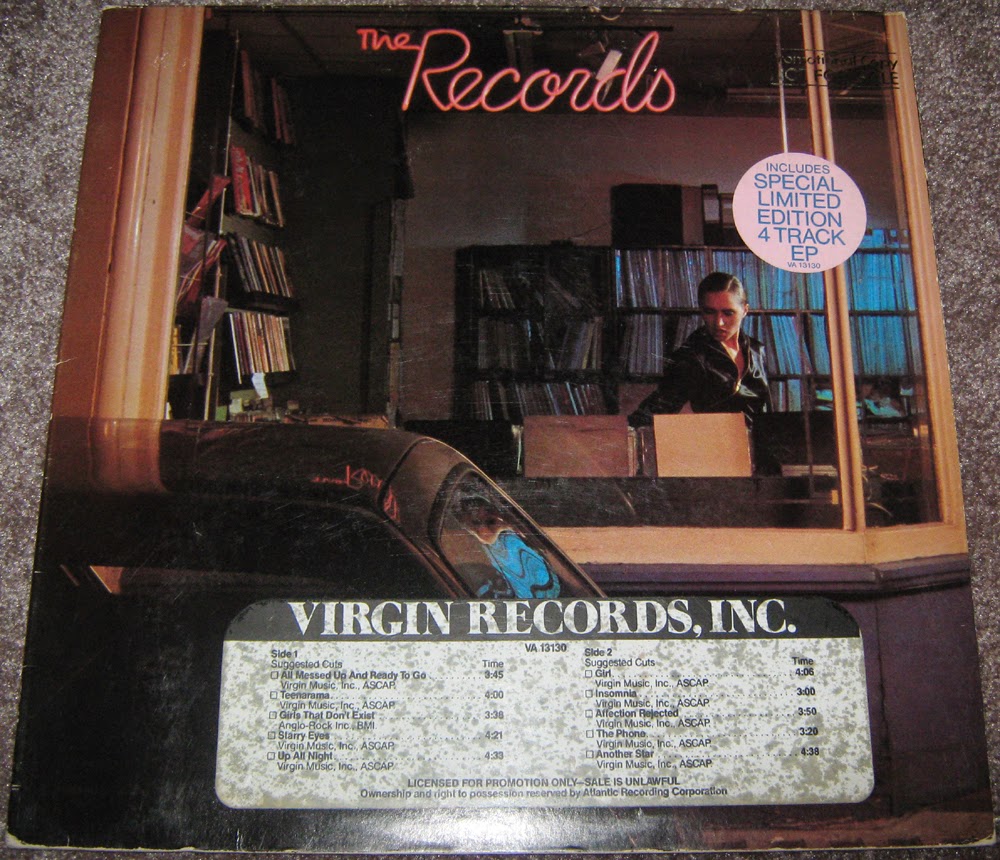 the only reason i bought this was for starry eyes and that track alone. though i did assume there might be at least one other good track. but nope, mostly just boring stuff that leans more towards plain rock. i could have just bought the single version of starry eyes, but this was the same price. plus it was a last additional to a bunch of records i bought online from the same guy. anyway, this one track is worth it. great catchy powerpop track out of 1979.
04. starry eyes (super catchy.)
inexpensive record pressed in high numbers. the gate-fold does look nice.
Posted by zach at 10:08 PM No comments: 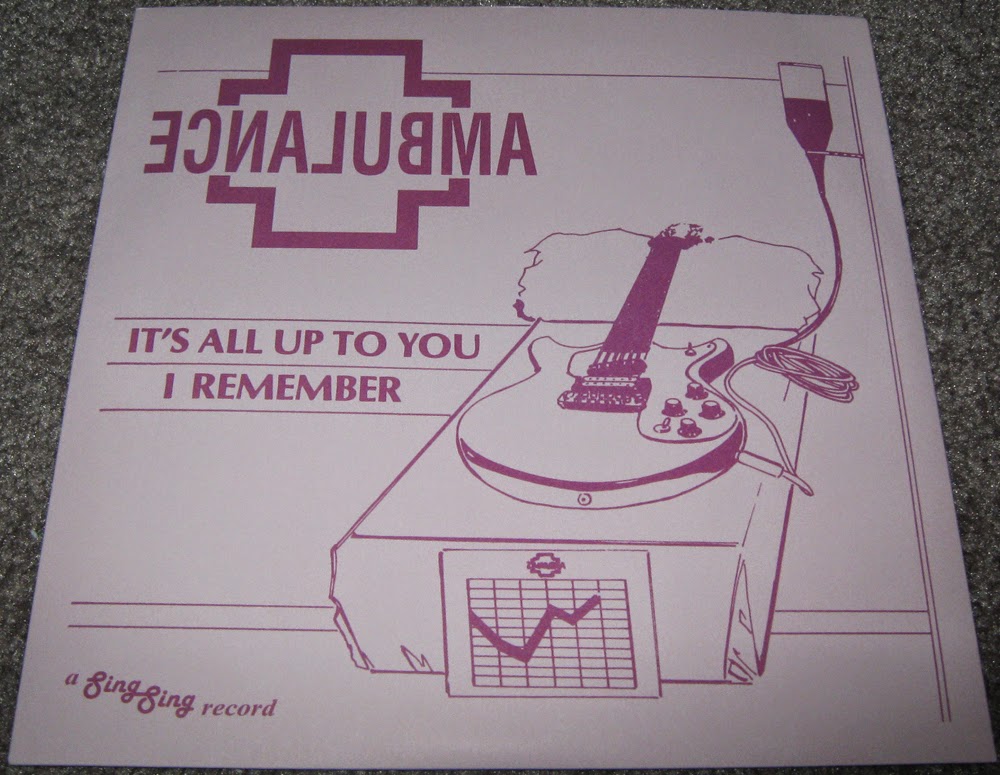 another quick powerpop record. it's ambulance's only effort on wax, put out in 1980. the first track is good and all, maybe if the flip side was weaker i'd enjoy the first track a lot more. but the flip side is so damn catchy, it leaves the a-side in the dust. i actually remember radio heartbeat records was going to re-release this 7" along with an lp of never before heard studio cuts. unfortunately the label folded i guess, you can still see the promos on their stagnate site. they were also planning on putting out the unreleased stuff of the limit, which luckily cheap rewards records picked up on and put out. i wish someone would get on the ambulance unreleased stuff too, anyway.
01. it's all up to you (very good track, but nothing speculator.)
02. i remember (fantastic, classic.)
so yeah, sing sing came in and did put out the great re-issue that you see here (but not the unreleased stuff). the original goes for insane amounts of money.
Posted by zach at 9:22 PM No comments: 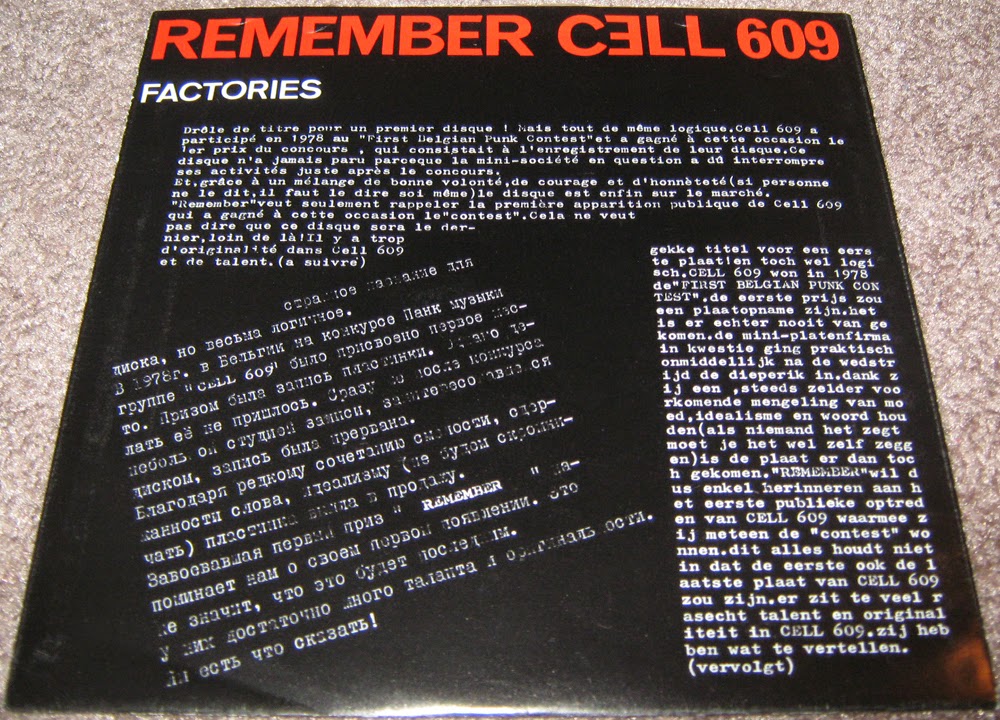 here's one of those mega rare kbd punk 7"s. this one comes from belgium in 1979. just two tracks of driving punk rock. according to the cover art, they won belgium's first punk contest and got to make a record from that. it says their story is to be continued but they never did anything after this. but it's just as well, nothing could live up to the greatness of these two tracks. at the start of the track on the flip-side, i took out the intro with a toilet flushing sound and the singer saying what he says. why? well, it was indeed repulsive.
01. factories (those vocals with that drum beat, crazy.)
02. re-pulsion (that guitar riff.)
you can thank that company out of japan again for at last, making this available at a decent price, instead of the hundreds of dollars the original fetches.
Posted by zach at 7:15 PM 1 comment: 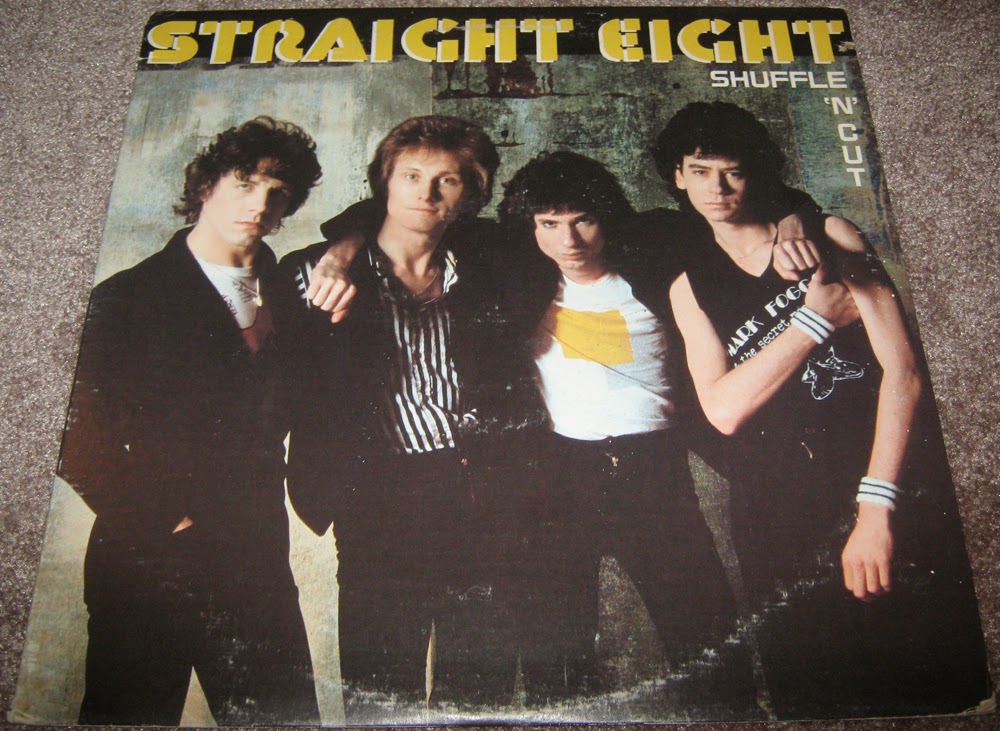 i'd never heard of these guys, but i was looking through a record store the other day and came across this record. there was a small sticker on it that said 'powerpop' and it was only $4 so i picked it up. released in 1980 in the uk, though i got the canadian press (much better sleeve then the uk original). wasn't really expecting much, but when i put that needle on, i was taken aback. the opening track 'i'm sorry' is killer. however, it's really the only thing on here that verges towards powerpop. i'd really just call the album pop. the rest is mostly boring or alright stuff. though there is one slower straight pop track on the flip side that is pretty catchy, so i thought i'd up that too. 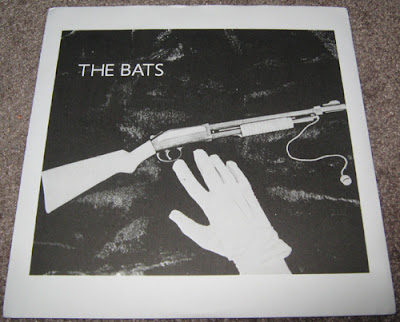 this is prefect powerpop right here. released back in 1980. the only thing i know about these guys is that they were young and from connecticut, and that they released an lp that i've yet to hear. both released on gustav records. chronic disorder, one of my favourite bands, released their first lp on that same label. a-side is a great catchy song and the flip side is fantastic beatles cover. just great all the way through. i remember seeing a connecticut punk documentary and sadly i don't think these guys or chronic disorder were mentioned.
01. popgun (super catchy.)
02. tell me why (my only negative is that they didn't go high at "anything i can do.")
sing sing put out a great as always re-issue of this a while ago.
Posted by zach at 2:59 AM No comments:

the retreads - would you listen girl 7" 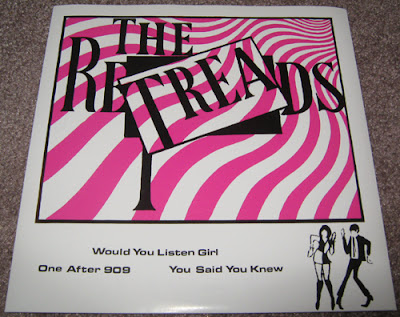 (((re-post from 12/04/13)))
one of the best beatles type 7"s out there. this great single was released in 1981. they came together for their love of the beatles. check out the bored teenagers site for some great band memories and photos, plus an early band rehearsal. when 1977 records put out the re-issue, the band reformed for a few more shows with all the original members. i really wish there was more recordings of this band. for this 7", they put out two original numbers, and a beatles cover. the two originals are fantastic, just flawless. the beatles cover is good, but the song just isn't one of my favourites of the beatles.
01. would you listen girl(super catchy.)
02. one after 909 (alright cover, just not that enjoyable.)
03. you said you knew (great song.)
you can get the re-issue put out by 1977 records.
Posted by zach at 12:19 AM No comments: 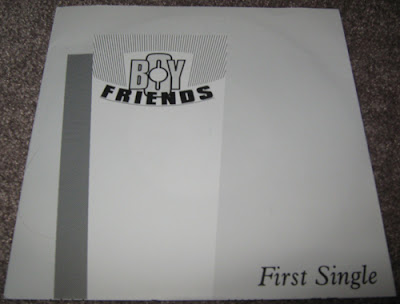 (((re-post from 11/30/13)))
this one's got one of the catchiest songs i can think of. amazing powerpop released in 1982. boyfriends came from the uk and broke up after the release of their single. a-side is the killer here, just a perfect song. the flip side is slower, but great too. nothing else to say, this is essential.
01. boyfriend (insanely catchy.)
02. give a little, take a little (more laidback, but great.)
1977 records put out a re-issue.
Posted by zach at 12:18 AM No comments: 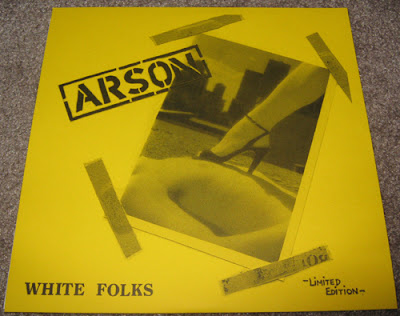 (((re-post from 11/28/13)))
frank over at the great shotgun solution posted up some toronto stuff, inspired me to put up one too. this one's got one of my favourite songs to come out of this city. their one and only release, put out in 1979. they formed back in 1977, and with members of the viletones and the ugly. there was a great zine interview with them last year in equaling x distort. tons of info and lots of photos and flyers. it's a really great read, and if you want, you can actually download the pdf of it on the exd site. on the original press of this 7", the a-side is (livin' with the) white folks. but on this ugly pop re-issue, the sides are flipped. not sure why they did that, but i'm not complaining. unfortunately white folks isn't that good of a track. it's an alright listen, but it's really slow and far too long. the killer here is coho coho. such a fantastic song.
01. coho coho (great sound and vocals, and actually really catchy.)
02. (livin' with the) white folks (kinda boring.)
go to ugly-pop for the re-issue of this.
Posted by zach at 12:16 AM No comments:

the skinnies - kill the beat 7" 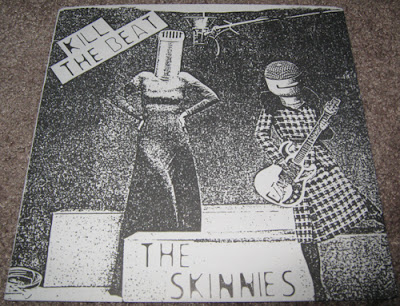 (((re-post from 11/25/13)))
finally got my hands on this monster 7". released in 1978 on the same label as the great normals and men in black. the label only put out four records with their last being a 7" by buns, which i've never heard, so if you have a copy, i'd love to hear it. well what we have here is a killer punk record. plus the cover is fantastic. great vocals with equally great music. driving rhythm and super catchy a-side. b-side is great too. so many punk records have great flip sides, but the a-side just kills so much that it's hard to live up to. just like here.
01. (i'm a dullard) (fantastic sound.)
02. out of order (great stuff.)
last laugh put out the wonderful re-issue.
Posted by zach at 12:15 AM No comments: