the beatles - live at the bbc volume two 7" 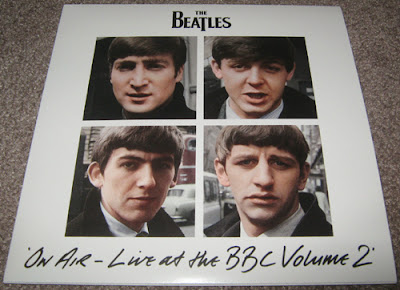 here is something rare. it's a promo 7" of the new beatles bbc record. wasn't available for sale anyway. they gave them away at a hmv in london. last week though i was informed that they were giving them away here in a toronto hmv if you bought any beatles merchandise. well when i saw what they were going for on ebay, i immediately ran out and bought some random beatles record and got this for free. these things are going from anywhere from 60 bucks to 500 bucks. plus there was only 300 pressed. everyone is just selling them. not me. i like the beatles and if i sell it now i'll never get this back. i wouldn't pay over 5 bucks for this, especially since all the songs here are included in the actual bbc record. kind of a weird collection of songs, but it's the beatles, so it's great anyway. and that cover's great too.